Insights into your microbial self

What is the microbiota?

The microbiota is a community made up of microorganisms that inhabit an environment. Members of the microbial community include; bacteria, viruses, archaea, protozoa, and fungi. The composition of the microbiota and the interactions between its members strongly influence the environment the microbiota occupies and its surroundings. Microorganisms can be found almost anywhere on our planet including our bodies: the intestines, the skin, the airways, the urinary tract, and other body sites harbour their distinct microbiota.

The microbiota is unique to every individual, just like a fingerprint.

Our microbial partners living with us are vital for our health, can protect us, but sometimes can pose danger. Therefore, it is important to understand the structure and functioning of our microbiota. In a therapeutic approach, this individualized aspect allows professionals to approach patient care on an individual level, taking into consideration the unique features of the microbiota of a patient.

Microbiota & Microbiome: What is the difference?

The microbiota refers to the collection of all the microorganisms that are populating an environment.

The microbiome is the collection of all the genomes of these microorganisms.

Good vs Bad: Healthy vs Unhealthy

The study of the human microbiota revealed that categorizing microorganisms, as good or bad, is often a too simplistic approach, and the deeper relationships between the members of a microbial community needs to be studied to determine the line between a healthy and unhealthy state.

Improving the condition of the microbiota, and thereby our health, is not simply the removal of the ‘bad’ bacteria and introduction of ‘good’ bacteria. Since the functioning of the microbiota depends on the interactions between its members and with their environment, it is important to understand the relationship between these microbes, prior to the removal or introduction of a specific microorganism.

If you were to view the microbiota as a piece of fertile land, which can cater for the growth of a variety of vegetation, the first step prior to planting would be to determine which plants would grow and flourish when planted near each other and which would not. In a similar manner, the human microbiota is a community of microbes that when co-existing in harmony support a healthy human body. However, a disbalance in its composition can undermine its functioning causing harm to our health.

Symptoms of a disbalanced gut microbiome

A microbiota test analyses the state of the individual microbiotas providing insights into the microbial self. Once a microbiota test has been performed and there is a clear understanding of the composition of the community, the information can be evaluated from a broad view.

Any disbalance or dysbiosis, a reduction in microbial diversity, and a combination of the loss of beneficial bacteria can be observed, studied, and understood.

A microbial expert can interpret the results, taking into account the information on your medical history to make suggestions or draw a diagnosis on what is needed for your body to be in balance.

Most antibiotics act on a wide spectrum of microorganisms; therefore, they harm not just a single pathogen but many other members of the gut microbiota. This can impact its equilibrium leading to disbalance. Thus, it is advised to take a course of probiotics during and after antibiotic treatment, to help your gut microbiota to re-establish a healthy community of a balanced population of beneficial bacteria. Since everyone’s biology is unique, a gut microbiota test can help identify the best individualised probiotic treatment to bring your microbiota to a healthy state.

Apart from helping restore your gut microbiome, a gut microbiota test can also assist in understanding what type of medication and in which doses can suit your body best. Conventional medicine uses standardized dosage for medication. However, it has been recognized that this may not fit some people. With the available testing, now anyone can check what dosage fits them best. This is particularly important for those who are on long-term or life-long medication.

From disbalance to balance

If a gut microbiota test reveals that a patient’s gut microbiota is in disbalance, a carefully compiled suggestion to improve the state of the microbial community is given by a microbiota expert.

The most common method of improving the state of the gut microbiota is with the use of specific probiotics and prebiotics. 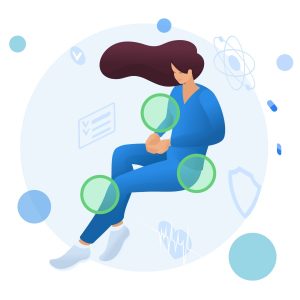 Probiotics are beneficial bacteria and yeasts that help create a balanced gut microbiota, usually can be bought over the counter in form of supplements. Their use can increase the proportion of microbes in the gut microbiota that are beneficial for the individual and at the same time bring down to the normal range the population of other microbes that were overgrown in the community.

Prebiotics are the beneficial bacteria’s nutrition that allows for it to grow and inhabit the gut microbiota, promoting a balanced and healthy gut microflora. Prebiotics can be found in a range of raw and fermented foods and can also be bought in form of food supplements.

Members of the Gut microbiota

Learn more about the main bacterial families found in the gut microbiota.

The Founders of The BioArte